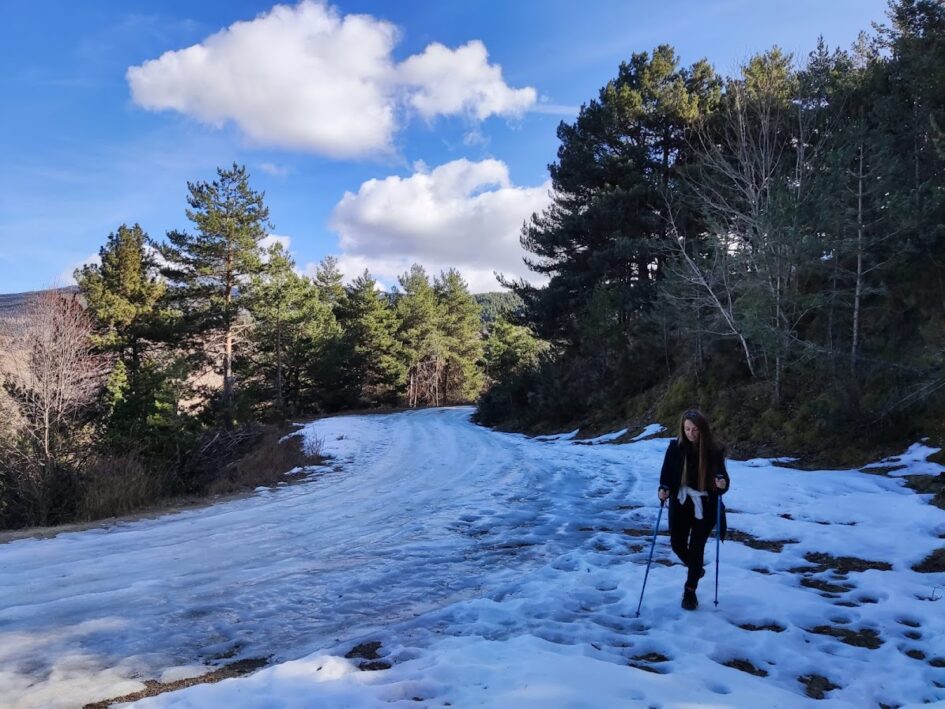 This February I spent most of my days in the mountains.

The Cerdanya region is one of my last discoverings. We have been there at the beginning of February for a few days, came back to Barcelona, and then went for another week because we wanted more. Even after that, leaving was so hard I am planning to go back asap.

So. The Cerdanya is a region that includes parts of the Eastern Pyrenees and it’s divided between France and Spain. We have obviously been to both sides and I can’t decide which is best.

The first time, we have been to the French side in a small village called Ossejá.

The village was lovely and had no hotels, so we slept in a house we found on HomeExchange.

Since we are here I will make a small digression on this. We have signed up for this HomeExchange thing a couple of months ago and so far found it a game-changer. The idea is: we pay a yearly fee of 130 euro and we can exchange our flat (not necessarily simultaneously) with other people, in exchange for some points. Then we can use these points for going somewhere we like. Apart from the initial fee you pay, there is no money involved but you get to sleep in some beautiful places for free. We thought this was not gonna work – also saw some reviews of people that said nobody was accepting their home exchange requests. Well, I guess we have been lucky because both times they accepted us right away and we slept in places we would have never been able to afford to stay in otherwise. In Ossejá (France) it was this 3floor house with a fireplace and even a fully stocked fridge the owner kindly asked to use.

And in Alp (where we went a week later – will get back to it in a bit) the house was just out of this world, with an awe-inspiring view, design furniture, and place for 7 people. We could not believe we did not pay for this. All we had to do was give our flat in exchange, that our guests left cleaner than how we left it. It was a win-win for everyone.

Back to Cerdanya. So on our first trip, we stayed on the French side, Ossejá, which was the typical French picturesque village with the boulangerie, the minimarket, and the local bar, but also had a huge park with a lake, horseriding center, a climbing wall, a skate park (!!) and all these things that only the French can do.

From there we went hiking on day 1, which was lovely with all the snowed peaks around (also some snow on the ground but I was equipped with my hiking poles).

On the second day and the third day, we went to Llo. We did the via ferrata – picked the “easy” path and loved it, felt so proud that maybe next time we can do the most difficult one. And then we went to these thermal baths that we liked so much that the second week when we were staying in the Spanish side of the Cerdanya, we drove all the way to France to go to these baths again. Llo is tiny, but to go there you will pass through Saillagouse, which has a nice market in the mornings, the best croissants at Le pain du jour and also has La Crapahuteur, where you will eat delicious stuff.

Beware that you are in France so if you are coming from Spain you will need to adapt to completely different opening times (restaurants may close at 9 – shops I hardly saw them open) and also keep in mind they are in France so they speak French. It’s something they do. Though some of them speak some Catalan too.

It’s also incredible how you walk 5 mins into France and they already know how to make croissants. Then you do a few steps back into Spain and they do terrible croissants once again.

In this area, there is a small Spanish village completely surrounded (exclave) by France. It is called Llivia. And when we were there I thought ok we are in France let’s enjoy France and not go to this Spanish exclave whatever. But it was very good! Incredible landscapes and great food everywhere. Actually, we had the best chuleton and then attempted the 30mins hike to the castle and were about to puke. Panos abandoned the mission after 3 minutes, I continued for 10 mins more and decided no more eating chuletones minutes before a hike.

The day after the best happened. We went skiing! This was my second time skiing and I panic-cried just at the beginning, which was a big achievement. I stayed 3 hours on the baby slopes, then went to the green easy slopes. By the end of the day, I felt like a professional skier. The place that had the luck of seeing me showing around my skiing skills was called Cambre d’Aze, was perfect for beginners and it wasn’t too expensive.

As we went back to Barcelona I thought my skier talent was just getting wasted in the city, so I joined another ski trip – again in the Cerdanya, this time the Spanish part – sleeping in the beautiful village of Alp. It is lovely and even if small, it has everything you need: especially this burger shop, thank me later.

La Molina is the place we went to and it’s great because you can reach it also on a day trip from Barcelona, there is a train that brings you there and then a bus to the slopes. I love how I am talking as I know shit about skiing when just the previous time I was having a breakdown on the baby slopes.

We stayed in this cottage in Alp with all the wooden furniture and fireplace and amazing view. I can safely say that we spent the first night thinking about how it was possible that we could stay there for free. Unfortunately, the weather wasn’t great at the beginning so all we had to do was go to the thermal baths and look for croissants in France.

But the other days we went skiing at La Molina where everyone could appreciate me going at this point even to the blue slopes.

We also worked for a couple of days – someone has to work to pay for all that ski – but doing it from the mountains made a completely different experience.

The last stop was Puigcerdà, which is the “capital” of Cerdanya. It has a nice lake and some cool bars and mountain gear shops. It’s overall an expensive area, you can tell it from the houses you see around, but it’s incredibly pretty.

So the conclusion of this story is that since I am a mountain girl now I am already looking up ways to go back and devote my life to the snow.

Too bad that in 2 weeks I will be in Cape Verde and I don’t think I will find much snow there.