Carrilet Route: a cycling greenway from Olot to Girona 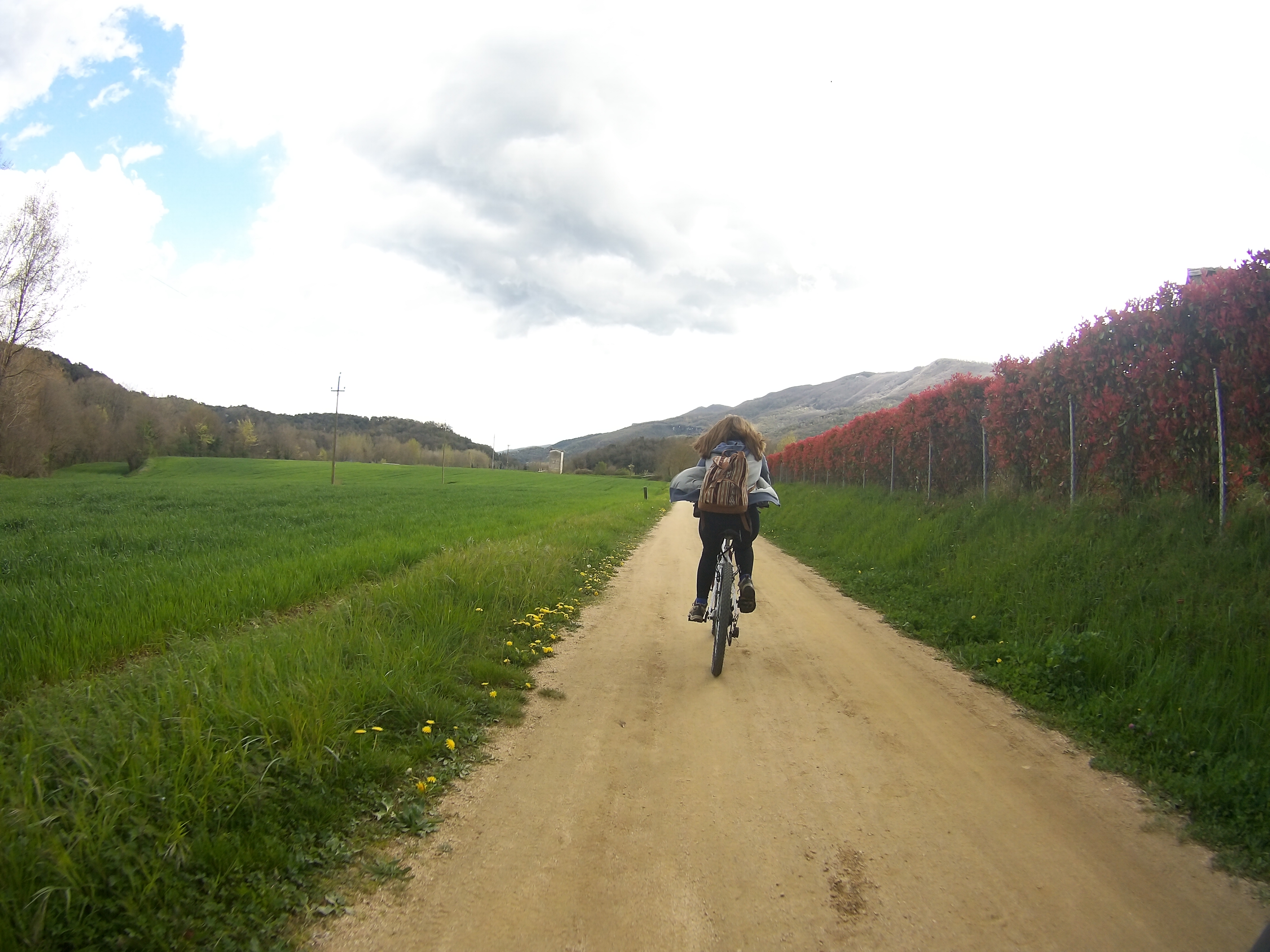 Carrilet Route might be the best cycling itinerary I have made since I live in Catalonia.

There are many cycling options, as the whole area that goes from Barcelona up to Ripolles or Garrotxa offers several possible paths.

Many of them are known as Greenways and follow old railway paths, which you can cover walking or cycling.

When it’s a long distance I prefer going cycling and I use my very professional Carrefour bike (89 euro very worth it). 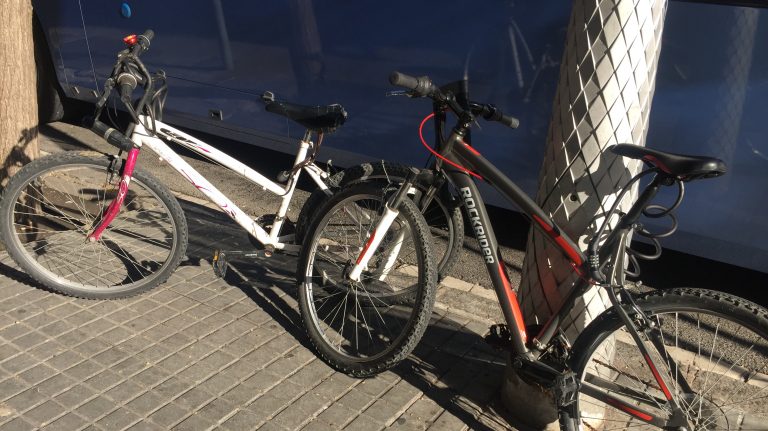 For this route we decided to take a Teisa bus from Barcelona to Olot and then to cycle from Olot until Girona.

We take the bus at Pau Claris street and while I am placing my bike in the luggage compartiment I spill all my coffee on the floor, on my coat, on the only jumper I brought.

Unfortunately, I can’t really blame Panos this time as is 10 metres away from me. That was a bad start. 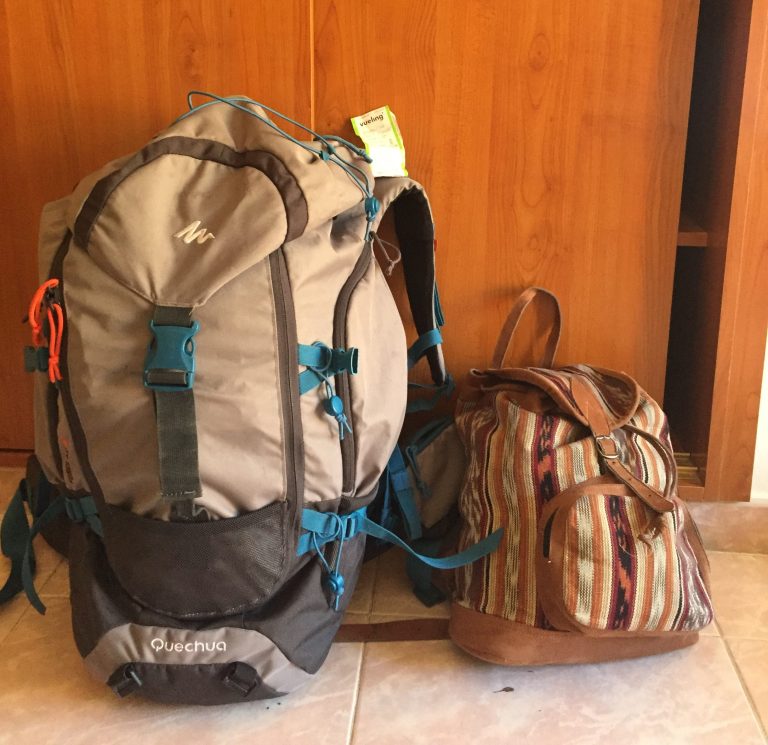 The weight is always equally distributed in our trips

We get to Olot at 12.20. I have been already twice to Olot, so I don’t remain in the city for a long time. Olot is not unforgettable, but in case you pass around there, don’t forget to check out the volcanoes.

We start up our route, but after 30 seconds I already fall off the bike. 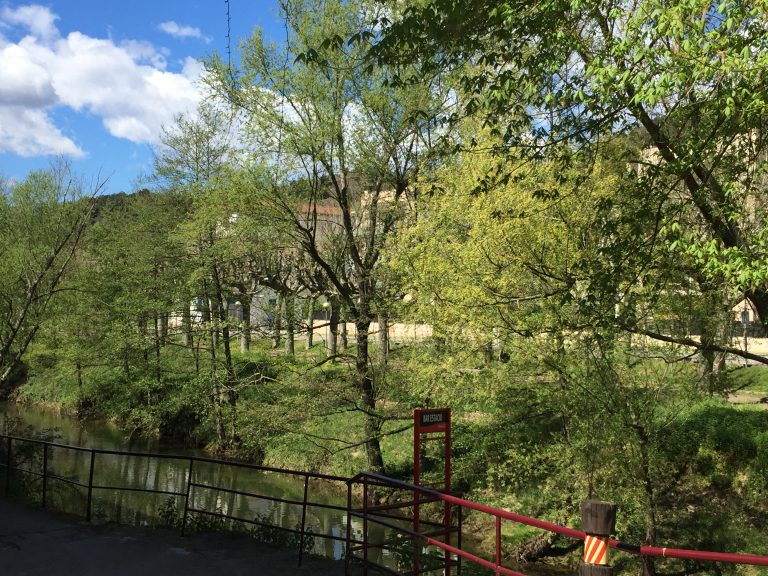 My finger starts bleeding, my legs hurt, I whine without a reason.

Panos patiently waits I am done with my show. I ask him how can he be so sure I didn’t break an arm, he says my face is not someone with a broken arm’s one. In the next 10 minutes we discuss about the hypothetical face of someone who just broke an arm.

We start again, following those signs: 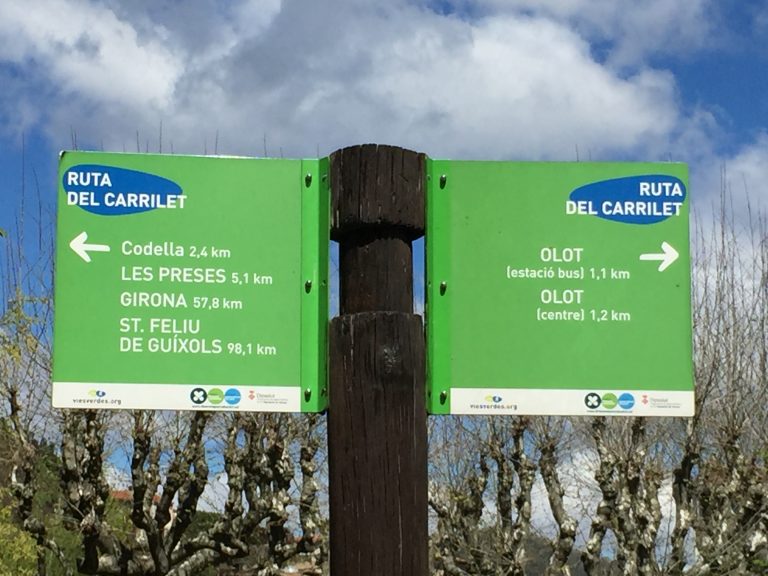 Those signs will follow during the entire path, approximately every 500 meters.

During the entire trip and more (up to the coast, in 120 km) there is a cycle lane and clear road signs. A thought goes to our advanced motherlands (Italy and Greece) where you barely find a sign to go to the city center. We remember why we moved to Barcelona. 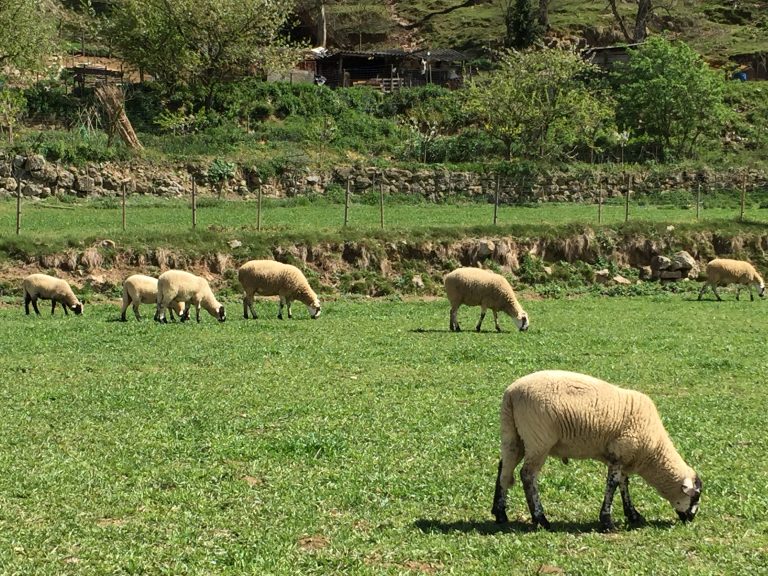 The few people we meet on the day

The landscape is gorgeous. We feel free as we speed in the nature and we feel lucky because it’s not raining. The previous day it was pouring rain. 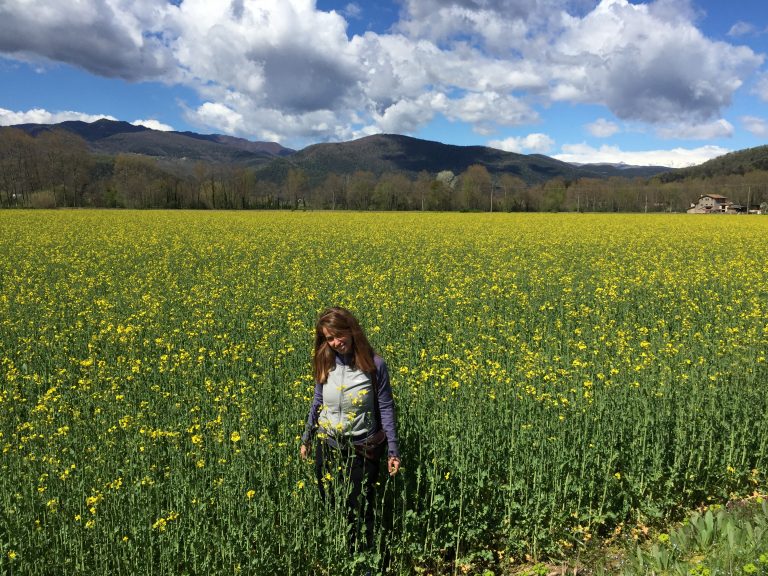 After a bit more than 20 km we get to our first destination, Sant Feliu de Pallarolls.

The village is pretty, somewhat sad though. I go through my usual 4 phases of getting to a new village: 1. I want to move here; 2. I would cut my veins here 3. I want to leave now; 4. Ok I can stay until tomorrow. 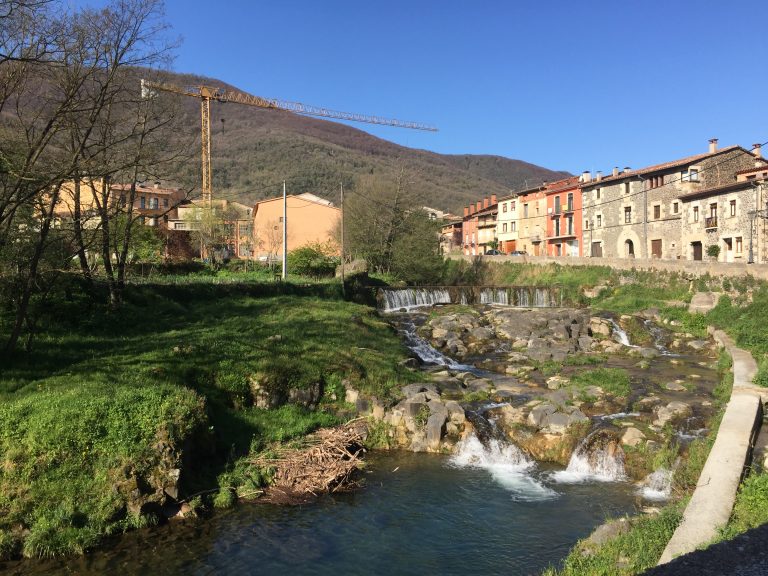 We stay at a nice hotel called Fonda Finet, being the only guests for the night.

After a 2 hours siesta we go for a stroll. We are ready to hit the village and enjoy the nightlife after a delicious dinner at a gourmet local restaurant.

But after a beer in the bar of the main square, called El Firal, where we appreciate the company of 3 little old men watching football, we find out the only 2 restaurants of the village are closed.

Some meat and wine still delight our night.

The day after we wake up full of energies as we still have 50 km to go!

I am highly reluctant I will get through the day, so I secretly look for taxi numbers to save me in case I can’t make it.

Our first goal is Cogolls waterfall, the Molì de Murris.  As the guy at the hotel asked if we were trained enough for the steep rise, I was already picturing myself on the floor again.

Surprisingly I made it, with a few imprecations and only cheating in a couple of occasions, where I got off the bike and carried to the top.

After a few slow-motion videos of the waterfall we resumed our route up to a second waterfall, the Gorg de la Mola.

It’s a heap of water I would have loved to jump in as I was burning by that time.

The last waterfall of our collections was the Santa Margarida one. To get there we had to overcome the following obstacles: 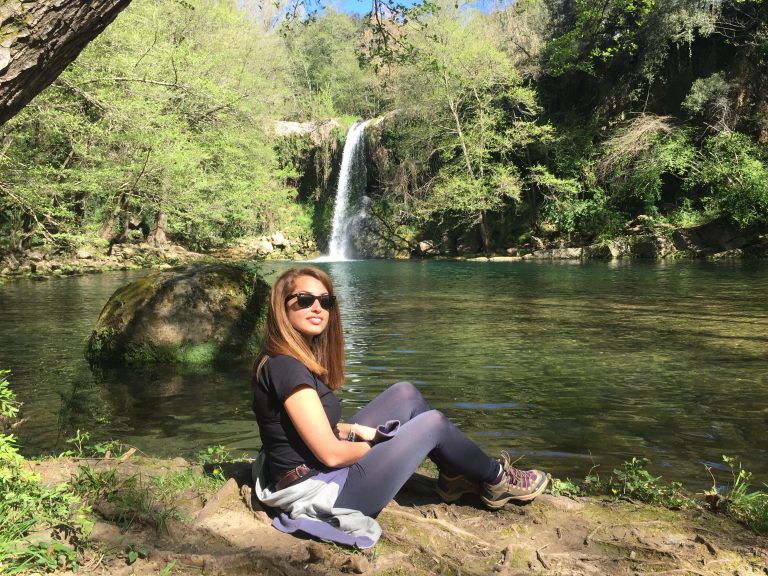 At least the view was worth it

After those detours we went back on our paths as there were still 40 km left to Girona.

The first part had some declivities. 15 km later we passed Amer, where we initially wanted to sleep, but Sant Feliu de Pallarolls looked better.

As we continue in a fast pace, I start thinking I might make it.

In the last 10 km we had already lost perception of our asses and get to understand why cyclist go around with those weird armors.

Girona is very close but we are still in the hood. It’s only 1 km away from the city that we finally spot some humans.

And we finally reach our finish line! 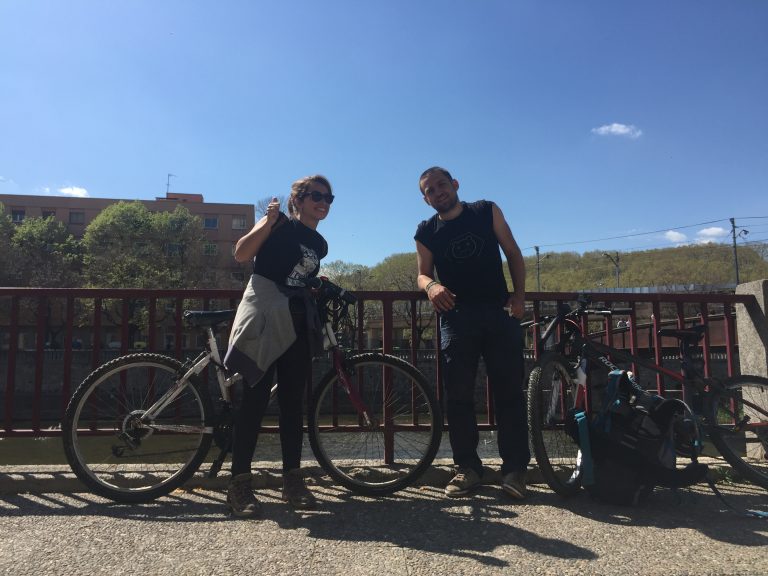 The picture of the Victory

On the way back, in the train, we start planning our next itinerary, the Carrilet Route II, that starts in Girona and ends in Sant Feliu de Guixols, on the seaside…